Lessons in recovery: One man and his fight to save New Orleans

by John Pope | NOLA.com | The Times-Picayune

The Times-Picayune is marking the tricentennial of New Orleans with its ongoing 300 for 300 project, running through 2018 and highlighting 300 people who have made New Orleans New Orleans, featuring original artwork commissioned by NOLA.com | The Times-Picayune with Where Y’Art gallery. Today: former Tulane University President Scott Cowen. 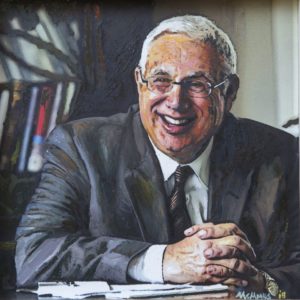 The legacy: In August 2005, shortly after Scott Cowen started his eighth year as Tulane University’s president, his defining moment arrived. That was when Hurricane Katrina hit, inflicting about $650 million in damage on the school. He vowed to rebuild, but his strategy was neither easy nor universally beloved, leaving behind a leaner Tulane and shuttering Newcomb College, Tulane’s 120-year-old undergraduate college for women. At the same time, Cowen became a vocal and vital figure in New Orleans’ recovery, with a focus on improving the public education system and helping ensure the city’s needs weren’t forgotten nationally. Today, Tulane continues as a beacon of higher education in a rebuilt New Orleans — and as a testament to Cowen’s leadership.

When Cowen was a child, he had dyslexia, which went undiagnosed for years. As a result of this condition, he had trouble learning and was labeled as lazy, stupid and indifferent.

Cowen regularly sprayed his white hair green — the primary school color — for Tulane’s football games.
He was among a group of university staffers who rode out Katrina on the second-floor lobby of the Reily Student Recreation Center. On that part of campus, the water was more than 2 feet deep, forcing him to take a motorboat to Freret Street when he left four days after the storm.

In addition to the closing of Newcomb, three of Tulane’s five engineering majors were eliminated in the wake of Katrina, as were eight sports. In addition, about 230 faculty members were laid off. Cowen justified the move as a way to cut losses and retrench in a smaller city with different needs.

Cowen also made community service a requirement for graduation, and he helped form the Cowen Institute for Public Education Initiatives to revitalize public education in the city.

In addition to being Tulane’s president, Cowen was appointed to the Bring New Orleans Back Commission and the New Orleans Redevelopment Authority, and he and City Councilman Arnie Fielkow formed the Fleur de Lis Ambassadors, a group that barnstormed the country to ensure that Americans remembered and cared about New Orleans.

As a result of what Cowen accomplished after Katrina, honors poured in. Time magazine named him one of the country’s top 10 college presidents, he received a Carnegie Corporation Academic Leadership Award, and he was elected to the American Academy of Arts and Sciences, a 238-year-old center for independent policy research whose founders included John Adams and John Hancock.

Cowen retired from Tulane on June 30, 2014. At his final commencement, he asked Saints quarterback Drew Brees — to whom he had just given the President’s Medal — to fulfill a dream by throwing him a pass. Cowen caught it.