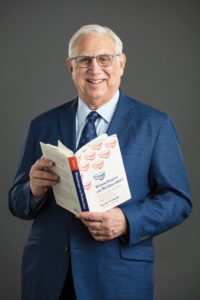 Scott Cowen turned over Tulane University’s presidency to another four years ago, but he never gave up pondering problems facing leaders of higher education.

He launched a second book recently entitled “Winnebagos on Wednesdays: How Visionary Leadership Can Transform Higher Education,” and he also writes articles about education leadership for a variety of publications.

Recognized as one of the country’s outstanding university presidents by Time magazine and one of four winners of a 2009 Carnegie Corporation Academic Leadership Award, Cowen uses the printed word to both praise and criticize university leaders, especially on the subject of “big-time” athletics.

He also reminds readers that while in need of a good deal of tweaking in matters of academic focus, America’s universities are the backbone of its global standing and the engine that delivers millions of young people into successful lives.

Two recent polls by the Pew Research Center and Gallop show disturbing negativity among the public about higher education, Cowen says, particularly among adults identifying themselves as Republican or independents that lean Republican.

A 2017 Pew Research Center’s poll showed that 58 percent of Republicans believe that colleges and universities have a “negative effect on the way things are going in the country.”

“That’s unbelievable,” he says. “When we look at the facts, it is just the opposite.”

Cowen cites figures that show adults with at least a bachelor’s degree have a 2.5 percent unemployment rate and earn considerably more in salary than those holding community college or high school degrees. Also, he says, there is a correlation between happiness levels reported by university graduates and the civic engagement that university life steers them toward.

The good news is this: “There’s more innovation going on in universities than people realize,” he says.

Problems persist, of course. His book explores ten conundrums facing university leaders. One is how to select applicants in a fair manner. Cowen says universities have allowed publications such as the U.S. News and World Report, which ranks universities according to college entrance scores and rejection rates, to drive decision-making.

Even though some college leaders have had the courage to resist chasing such bogus rankings, he says many top schools see no need to change.

“We have caused some of the problems for which we are being criticized,” he admits. “But we are not blind to the problems.”

Another issue provides the basis of the book’s title. Cowen relates a conversation he had in 1998 with a Tulane football coach who had accepted another coaching offer even though he had been promised a competitive salary to stay at Tulane. The coach said he wanted to lead a team that produced so much buzz people would line up RVs on Wednesday for a Saturday game. At that moment, Cowen realized that universities were in danger of ceding academics to a bigger demand for “entertainment.”

This conflict is the subject of a recent article he wrote for Sports Business Journal. In it, Cowen calls college sports “year around insanity.”

The article relates recent scandals involving big-name universities that have covered up academic fraud and even sexual abuse to protect athletic programs. “Amid all the finger-pointing,” he writes, “the responsibility for the ongoing madness lies with university presidents and governing boards. It is the responsibility of university leaders to stay true to their primary goal: Students first, period.”