Scott Cowen on Winnebagos on Wednesdays 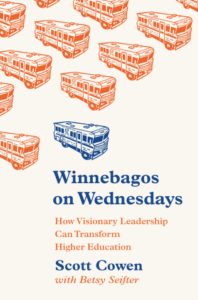 In Winnebagos on Wednesdays: How Visionary Leadership Can Transform Higher Education, Scott Cowen, president emeritus of Tulane University, acknowledges the crisis in higher education but also presents reasons for optimism as courageous leaders find innovative strategies to solve the thorny problems they face. Telling stories of failure and triumph drawn from institutions all across the nation, Cowen takes the reader on a fascinating trip through varied terrain. Recently, Cowen answered some questions about his book and what he sees as a burgeoning opportunity to reshape higher education for the future.

What’s up with the title? I’m intrigued.

The title emanated from something that happened in the spring of my first year as president of Tulane, after an undefeated season for our football team. I made the coach an offer he couldn’t refuse—and he refused. He said he was leaving for Clemson, where the program was so spectacular that fans lined up their Winnebagos on Wednesdays in anticipation of Saturday games. That’s when I realized Tulane was, for various crazy reasons, in the entertainment business, and we weren’t on the A list. For me, the anecdote became a metaphor for all the absurdities and challenges confronting higher education, and started me thinking about how to stop the madness and tackle our problems.

Why did you write the book?

We’re obviously at a tipping point in higher education, with rising skepticism about its value and escalating demands for accountability, affordability, and access. It’s a moment to take stock, and I finally had time to do just that—reflect on my entire career and the lessons I’d learned. A key moment for me was Hurricane Katrina, when the survival of Tulane hung in the balance. I saw then that the two critical elements required to sustain and invigorate an institution are an inspired, distinctive mission and leaders who have the guts and determination to convert that mission into meaningful results. In the book, I tell stories about crisis points when leadership counted most: I parse some of the failures but also show innovative approaches that are being implemented right now, and that point the way to creative, practicable solutions. My aim was to get people to rethink the issues that plague all our schools—value and impact, diversity, financial sustainability, athletics, medicine, mission, governance, leadership—in order to improve our institutions and forge a path into the future.

What are some of the most important challenges facing higher education?

The list above itemizes many of them, but financial sustainability in particular cuts across all the issues. Right now, the cost of a college education is out of reach for too many, fueling perceptions of elitism and raising questions about value. In the book I describe the many efforts underway to cut costs, expand enrollments, develop innovative no-loan policies, and create new programs that enhance the “real world” value of a degree. But the ultimate challenge facing the sector is not the solving of any single conundrum. The fundamental task before us is to find the right people, the right governance, and the right mission if higher education is going to continue to be an engine of innovation and progress. A friend of mine from my days in business management used to say, “Success is all about the ‘who.’”  And that’s the bottom line: people make the organization. They establish the structures, define the mission, set the tone, and create the ethos that helps an institution thrive.

What is the most surprising news in the book?

The news comes from schools people don’t know much about. Looking at the usual suspects—the Harvards, Yales, and Stanfords—you won’t see large scale institutional transformation occurring; the more famous and successful an institution is, the more likely it is to stick with the tried-and-true—and, ironically, the more likely it is to be sowing the seeds of its own decline. The most promising changes are occurring at lesser-known schools, where innovations have dramatically heightened impact. For example, Xavier University, a small Catholic historically black school in New Orleans, led for decades by Norman Francis, has become the major pipeline for black doctors, scientists, and pharmacists in the U.S. Paul Quinn, a historically black college in Dallas led by Michael Sorrell, has reinvented itself as a hub of urban entrepreneurship while expanding its outreach to Latino students. Arizona State University, with Michael Crow at the helm, has increased its student body by 50% to 83,000, expanded African-American and Hispanic enrollment, consolidated departments into institutes with shared administrative costs, launched innovative online programs, and forged partnerships with other universities and private businesses. The University of Southern California, under Steve Sample’s leadership, has become a first-rate academic institution and an anchor for south central Los Angeles, with well-funded institutes, a dramatic increase in productive research, and a menu of cutting-edge interdisciplinary studies. Northeastern University, with its century-old co-op program—academic credits for experiential learning in a range of paid internships—has finally caught up with the current zeitgeist, becoming a magnet for students seeking preparation for the job market. All these schools, and many others, demonstrate that regional presence, pedagogic innovation, and a strong sense of mission create value and enhance impact.

How are the leaders we need tomorrow different from those of the past?

The scholar-president—typically a white male in his sixties—may fast be becoming a relic. Given current cultural shifts and upheavals, it’s clear that we need leaders who are more diverse on every measure—race, gender, geography, ideology, experience— reflecting the nation at large, and with the potential to be models and mentors on their campuses. In addition to personal histories, we should also be looking for traits like versatility and adaptability. In the coming era, university presidents will need to be agents of change, crafting new directions that keep pace with unfolding events; skillful executives who can steer complex multibillion-dollar organizations; astute assessors of talent; and inventors of creative solutions to the problems they will inevitably face. We are likely to see more “unfiltered” leaders, without the standard scholarly résumé, who promise to bring fresh perspectives drawn from the worlds of business, government, and the military, and more “blended” leaders, with one foot in the ivory tower and one in the outside world, who should be able to bring the two domains together in fruitful ways. But the sine qua non of an effective president is the quality of emotional intelligence: the ability to listen and empathize is an indispensable skill in the fractious times we live in. At this precarious moment, when we are facing a paradigm shift in priorities and possibilities, we need people at the helm who will preserve what is best from the past, invent novel approaches for the future, and embody the enduring values of civility, compassion, and integrity.

Scott Cowen is president emeritus and distinguished university chair of Tulane University. His books include The Inevitable City (St. Martin’s) and Innovation in Professional Education (Jossey-Bass). Cowen has written for such publications as the New York Times and the Wall Street Journal.